Yesterday we all went to The Hallgreen Retired Greyhound Trust Dog Show at Hallgreen Dog Racing Stadium where Nikki used to race. We were all so excited to go and see where Nikki used to spend all her time, I have never been to a dog race (I was put off when I first heard about what happens to greyhounds when their racing days are over, which was when I first wanted to adopt) so was not sure what to expect inside the stadium.

Nikki seemed to actually get excited when we arrived and I think she recognised it. I still haven’t done a big Nikki update yet, but if I had, I would have told you all how she is still extremely nervous around big groups of people. Well, this wasn’t the case yesterday, she was really quite relaxed and loved all the fuss and getting to see all the other greyhounds!

We had a good look around and met all the kennel dogs (more about that later!) and the boys played some of the games. then we let Nikki have a go at fastest recall. Some of the greyhounds loved it and went all around the track!! Nikki however was not keen, the boys waited half way for her and as soon as she saw them she stopped running and went for cuddles! I think this was lovely as even though she obviously didn’t win anything it showed she is a proper family dog now and not a racer anymore 😀 *proud dog mummy moment*

The only other category we entered her in was ‘Youngest Handler’ with A as her handler. I was so pleased with Nikki for being so gentle with A as he still has a broken arm, you can’t tell in the picture and I don’t think anyone in the show noticed but his right arm is in a plaster cast from his wrist up to under his arm, it has been 8 weeks now and it had to be re plastered as it still hasn’t healed! I think at one point he dropped the lead and someone gave it back to him in his right hand so I was having ‘over protective mum’ stress because if Nikki had run I hate to think what he would have done (he wouldn’t let go of her I know that!). Anyway, no rosettes were won but they made the last few which I think is good for a 4yr old with a dog he has only had 6 weeks 😀

At the end of the afternoon we sat in the bar so Nikki could have a lie down and a drink of water, it did make me laugh, I bet she never expected to end up there after a race! 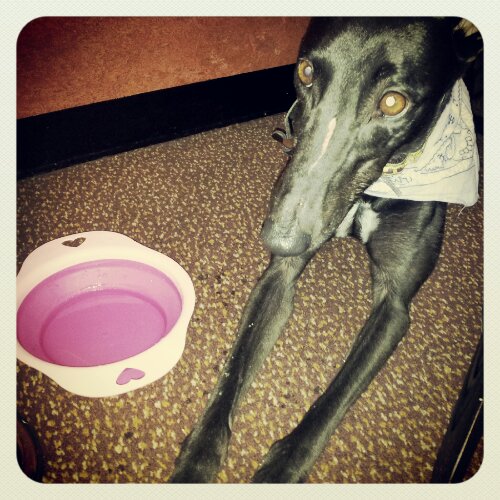 We treated Nikki to a fancy new collar while we were there and she looks very smart in it! We were going to get her photo taken while we were there as there was a photographer, but there were quite a few people waiting and the boys were getting a bit restless! I have made contact with the photographer though as he takes photos of greyhounds racing and I am desperate for a picture of Nikki in her racing days, although there aren’t any of her races on his website so not sure if he will have any. Anyone have any ideas of other ways I could get a photo of her?

We managed to resist all the hounds in need of homing yesterday despite Gertie making quite an impression on us. We would love a second greyhound and have talked about it a lot, but are trying to remain strong and be sensible (space/money etc). However I am totally in love with Noddy and if her remains at the kennels much longer I am going to have to have him!! I have made it worse as after a bit of investigating I am wondering if he is Farran Nodrog (Kennel Name Noddy) who had the same trainer and owners as Nikki….and was originally in Ireland and then Hall green (same as Nikki) as I have now convinced myself I have split them up and need to reunite them hahaha (lets hope the owners didn’t have a lot of dogs – I know of Bert who is still racing and I have my eye on him as well *step away from the hounds*).

I have wanted a greyhound for a while now. I think it started with reading a link someone posted somewhere about what happens to greyhounds after they retire from racing and then we saw some greyhounds at our local Sainsburys where they were doing an awareness day. I fell in love with them! Totally adorable, I would have had them all 🙂

However at the time it was not the right time for us to get a dog as I was in the middle of uni and the boys were a bit too young.

Dogsitting for ten days this past week made us realise the time was now right, the boys are both at school now and a bit more able to get involved and we all loved having a dog in the family. I looked on twitter and found via the rgt site and their events page that Hall Green RGT were having an open day so we decided to visit them.

The boys had some yummy cakes and we had a look at all the lovely dogs waiting to be homed. I had my heart set on a black one, but that didn’t narrow it down much! First off we chose to walk a lovely small girl named Tily, however, just as we got to the paddock the people who walked her previous to us decided to reserve her….I was so disapointed! We then asked if they could find us another quiet laid back, black one and they fetched Nikki out.

We went around the paddock and I was so surprised how well she walked on the lead, no pulling and was totally unphased by us having another dog with us, infact they got on very well, almost like they had always known each other.

The only thing that concerned me a little bit was her size! She is huge, I didn’t visualise us having one so large, but then I am 6ft so I think we suit each other 🙂

We reserved her and arranged a home visit so they could check out our house. The house check was last night and we passed! I was so nervous in case we didn’t pass, so nervous I forgot to offer then a cup of tea, which is not like me, how rude! I feel terrible!

I have organised some time off to settle Nikki in so we are waiting until 25th August to collect her, which will also give us chance to get everything we need. So long to wait though. Hopefully we will go and walk her this weekend and next so we can get her used to us a bit. So excited!!!!!!

We found out her race name was  Bens Nikita and have been watching her race videos and looking at her stats…unfortunately I know nothing about dog racing so most of it makes no sense to me at all!!

Posted from WordPress for Android